Ransomware CryptoLocker was one of the most infamous malware families of the years 2013 and 2014 and although the operation behind the original CryptoLocker malware family has been dismantled in 2014, it’s still a name that frightens a lot of users and system administrators alike. It is therefore not surprising that other malware authors try to capitalize on CryptoLocker’s reputation by releasing copycats. One of the most recent copycats that we became aware of is a ransomware named PClock that showed up just a day ago. Unlike CryptoLocker though, which was a somewhat complex and sophisticated piece of malware, PClock is quite primitive by nature.

Like all file encrypting ransomware (also known as crypto malware) PClock’s main goal is to encrypt important files on the victim’s system in order to compel them to pay a ransom in return for their files. Like CryptoLocker it gives the user a 72-hour ultimatum to pay the ransom of 1 bitcoin (approximately USD $300). Otherwise it claims to destroy the keys required to decrypt the user’s files:

If a user does not pay the ransom within the allotted time, it will display a last_chance.txt file that tells the user to download the malware again, which supposedly gives you another 3 days to make the payment. In reality though PClock does not destroy any keys, so the countdown is pretty much meaningless.

How PClock infects a new system

At this point it is not entirely clear how PClock, which is written in Visual Basic 6, enters a user’s system. Once it manages to to execute on the victim’s system however, it will copy itself to the current user’s application data folder using the sub-folder “WinCL” and the file name “WinCL.exe”. It then establishes persistence by creating a new registry value within the HKEY_CURRENT_USERSoftwareMicrosoftWindowsCurrentVersionRun key named “wincl” pointing towards the newly created WinCL.exe executable. The malware then tries to encrypt the victims’s files. It specifically targets files with one of the following extensions:

Every files the malware tries to encrypt is recorded within a file named “enc_files.txt” located in the victim’s profile folder. After the encryption has finished the malware will try to delete and disable all shadow copies. Shadow copies is the technology that powers the Windows’ “Previous Version” feature that allows a user to restore previous versions of a file. This feature is often used by ransomware victims to recover their files so a lot of ransomware families started to destroy any previous versions created by the shadow copy service. Last but not least the malware will create a shortcut to itself on the victims’s desktop and change the victims’s desktop wallpapter to the following picture: 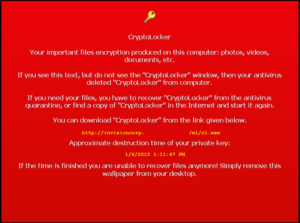 During the infection and encryption process the malware will try to maintain a log on the malware author’s command and control server:

This excerpt shows an example of an infection taking place to give you an idea about what is being logged.

PClock: a lot of show but little substance

Similar to the countdown, the ransom note is far from the truth as well and even though the malware may look somewhat professional at first glance it becomes obvious quickly that the people behind it are amateurs at best. The encryption algorithm used for example is just a simple XOR based obfuscation that uses a constant key on all systems. Due to that we are able to provide a decrypter that can be found further down this post. A more severe sign for the lack of professionalism is the fact that the malware contains several disastrous bugs that may cause data loss on the victim’s system. If the malware encounters a particularly large file for example that is too big to fit into memory the malware will end up truncating the existing file instead of encrypting it. The result is a 0-byte file that contains neither the original nor the encrypted file content. Once the malware messed up a file like that the last hope for the victim are data recovery tools.

How to unlock your encrypted files

As mentioned before the encryption used by PClock is extremely weak and can easily be reverted. To help and guide you in that process we developed a small decrypter utility. Our decrypter will enable you to decrypt any PClock encrypted files that haven’t been damaged beyond repair by the malware and clean up your computer without having to pay the ransom. You can download our decrypter here: http://emsi.at/DecryptPClock

If you don’t feel comfortable performing the decryption process on your own, feel free to create a support request in our support forum or send us an email.

UPDATE 2015-01-06, 8PM UTC: An updated version of PClock was released where this decrypter does not work with yet. We’re working on an update. Please return in a couple of hours if you are affected by the threat. Please also read this thread at the Bleepingcomputer forum where this topic is discussed.

NOTE: Emsisoft’s Fabian developed this decrypter in his spare time for victims of PClock. If you’re a victim, please read the instructions entirely before starting the process. To prevent getting infected in the first place, use Emsisoft Anti-Malware for complete protection against ransomware, viruses and all other sorts of malware. We’d appreciate it if you share this post so that more victims of PClock can be helped.

Have a great (ransom-free) day!