There is a new spam going around dropping malicious binaries and variants of rogue security softwares. We got this specific email few hours ago

There have been few alterations of the same email, ( More can be seen here ), and if looked closely all hyperlinked texts point to a non-twitter related url. We went to the specific link, and here is what we were looking at

Suspicious enough, and though currently the link seems to be not working we were able to get the sample. As of currently the detection rate is reasonably good, with most major vendors detecting the malware. Emsisoft Anti-Malware (EAM) was one of the first few vendors detecting the sample , and EAM users are completely safe from this specific malware dropper. We have already started analyzing the sample and related dropped samples , and we will keep you updated.

1. Attachment comes with the name Twitter_security_model_setup.zip

3. Normally the start of the email has something similar to 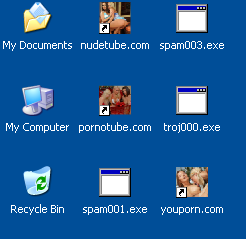 1. Creates following files on the desktop

We are currently carrying out a detailed analysis, and we plan to make another post very soon with our findings. Till then, happy twitting but make sure you click safe. Keep your Emsisoft Anti-Malware updated with latest definitions and also make sure Anti-Malware Guard is enabled.