It’s been just six months since we released version 10, and in that short time, today we’re announcing the availability of Emsisoft Anti-Malware and Emsisoft Internet Security version 11. Visible changes have been reduced to a minimum. Most of the improvements were under the hood, to keep your computer free of any Internet threats. The new version goes hand in hand with our company mission:

Make the most powerful yet light-weight protection software, in a way that makes it easy for everyone.

There’s a recent ‘trend’ emerging in malware scene: hijacking host processes to load malicious code. Instead of running their own processes, these nasties execute via script parser programs that are meant to automate simple administrative tasks on the system. The Emsisoft Behavior Blocker can now clearly distinguish between actual malware processes and dozens of available script parsers that may have been hijacked. 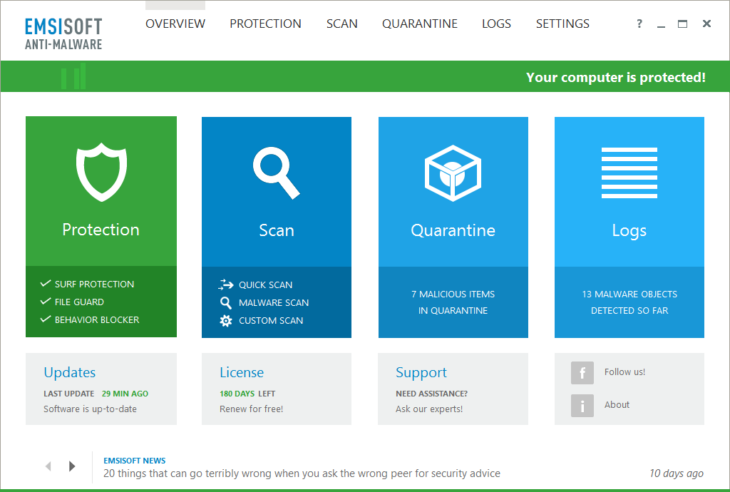 As predicted a number of times in the past, ransomware turned out to be one of the most dangerous online threats this year. Ransomware encrypts your personal files and requests a ransom of typically several hundred dollars to get the decryption password. Most of the latest ransomware specimens like Cryptowall or Cryptolocker make it impossible to crack their passwords which means victims either have to pay the ransom or lose their data forever. The built-in behavior blocker of Emsisoft Anti-Malware and Emsisoft Internet Security is now even better at interrupting ransomware attacks.

Smarter and quieter protection than ever

While many malware behavior patterns often appear in legitimate programs, there is also a group that exclusively exists in malware. Our lab used that knowledge to define patterns that allow us to block attacks without even bothering you with block/allow decision dialogs. Emsisoft Version 11 can now quarantine these infections on its own. Additionally we have optimized the detection of hidden installations of malware and also improved the detection of malware that registers itself automatically every time you start your PC.

Business customers asked us to implement a way that allows them to test the latest software releases before they roll them out to their large networks. Therefore we have introduced a new update feed called “Delayed” that gives system administrators a bit of time to test new software versions. It uses a similar mechanism as Windows 10 updates.

Emsisoft Internet Security 11 extends Emsisoft Anti-Malware with a firewall that hides your computer when connected to foreign networks. Plenty of detail improvements in version 11 reduce the potential attack vectors by trimming down network access to a controlled secure level, while the usage of the software remains easy and simple.

Emsisoft Anti-Malware and Emsisoft Internet Security 11 don’t run on Windows XP and Vista anymore. Customers who still belong to a rapidly shrinking group of XP and Vista users will not receive the new version via online updates, but continue to get signature- and detection-updates for their version 10 until the officially announced support end in April 2016.

Rest assured, it’s not our intention to push our customers to buy a new computer, but we have to face reality here: Both XP and Vista lack significant security features in their core structure, which is holding us back from protecting users to the highest possible level. Imagine the best and most advanced available home security system that just can’t do its job because all doors and windows of your home are kept open for thieves all the time – and there is no way to close them. As Microsoft no longer creates patches for newly discovered security leaks, we believe it’s unethical to sell antivirus software that pretends to protect while it can’t effectively do so any longer.

Our development team prides itself for fulfilling as many user wishes as possible. Therefore we have significantly reduced the number of annoying system reboots for software updates and also improved the performance of the cleaning engine while running third party software that is heavy on the system registry.

Warning – Geek language ahead:
Prior to version 10, Emsisoft Anti-Malware and Emsisoft Internet Security were compiled as 32 bit programs. Even on 64 bit Windows editions they ran as a 32 bit processes. That worked seamlessly, but requires quite a lot of extra code to switch between both platforms’ individual capabilities. In version 11 we have ended those detours by creating two standalone editions of our software for 32 and 64 bit Windows. That allows us to use available system resources more efficiently. Our installers contain both, so you don’t need to worry about getting the right one. Emsisoft version 11 automatically installs the correct edition based on your operating system.

If you already run version 10 on your PC, you will receive the brand new software automatically via the built-in online update. If you are new to Emsisoft please download the product of your choice and test it up to 30 days for free and see for yourself:

Malware Removal Guarantee
Our malware removal experts will always help you clean your system. This service is free of charge and has no obligations.

Emsisoft Technology Guarantee
As always, all customers who already own a valid license will receive this new version at no cost, through the integrated online update function. No re-installation is necessary.

Free 30-day Trial Period
It is vital to us that you are given the opportunity to judge the quality of our products and services for yourself before purchasing them. Test any of our products for free for 30 days!

Money-Back Guarantee
Should you not be satisfied after purchasing our products, you can receive a full refund for up to 30 days after purchase.

Loyalty Bonus on Renewals
License renewals after the first year cost 25% less, and with every additional year that you remain our customer, you will receive an additional 5% price reduction – that’s a 60% discount!

Award winning
We’re committed to providing world class software that is recognized by a continued series of awards from renowned antivirus testing labs.

Ethical Business
Today, many software companies aim for quick cash, even if that means mistreating or fooling their customers. Emsisoft has never, and will never, play that game. 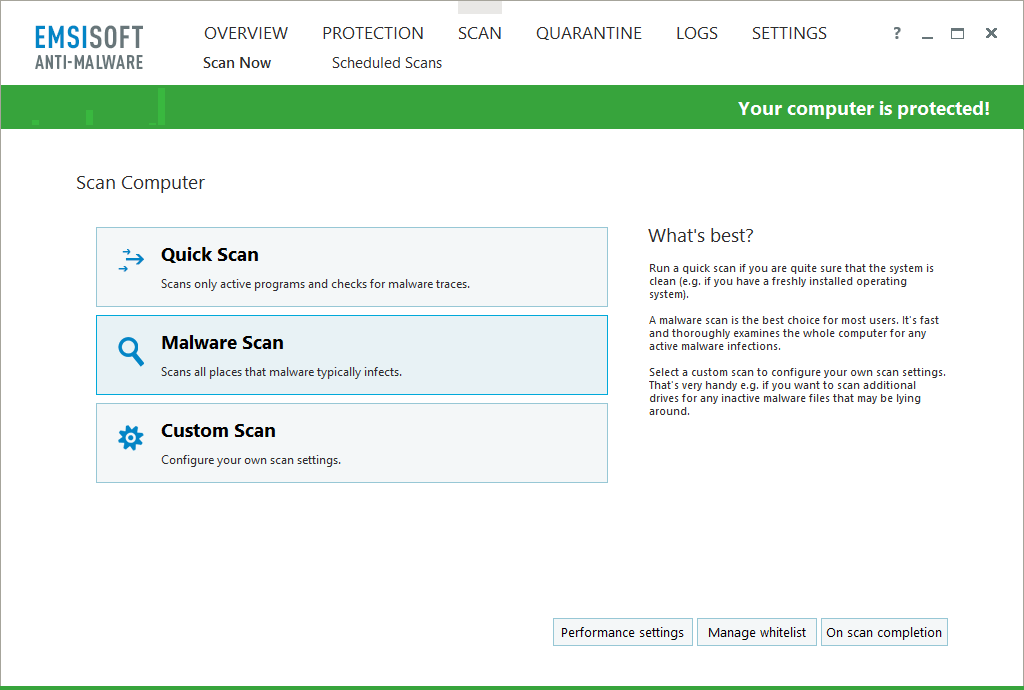 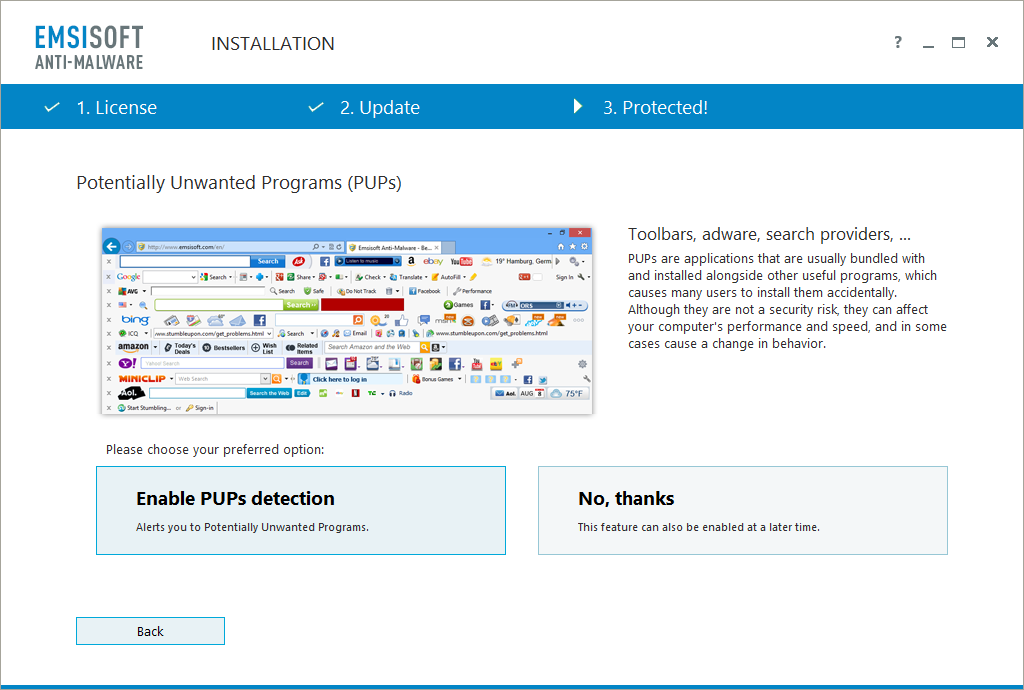 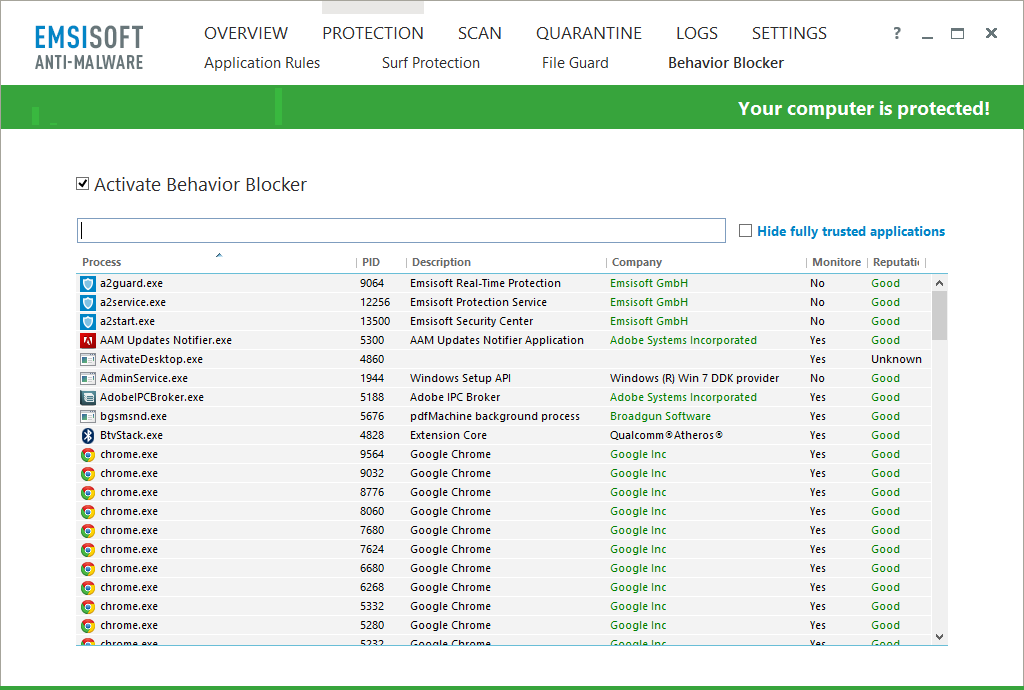 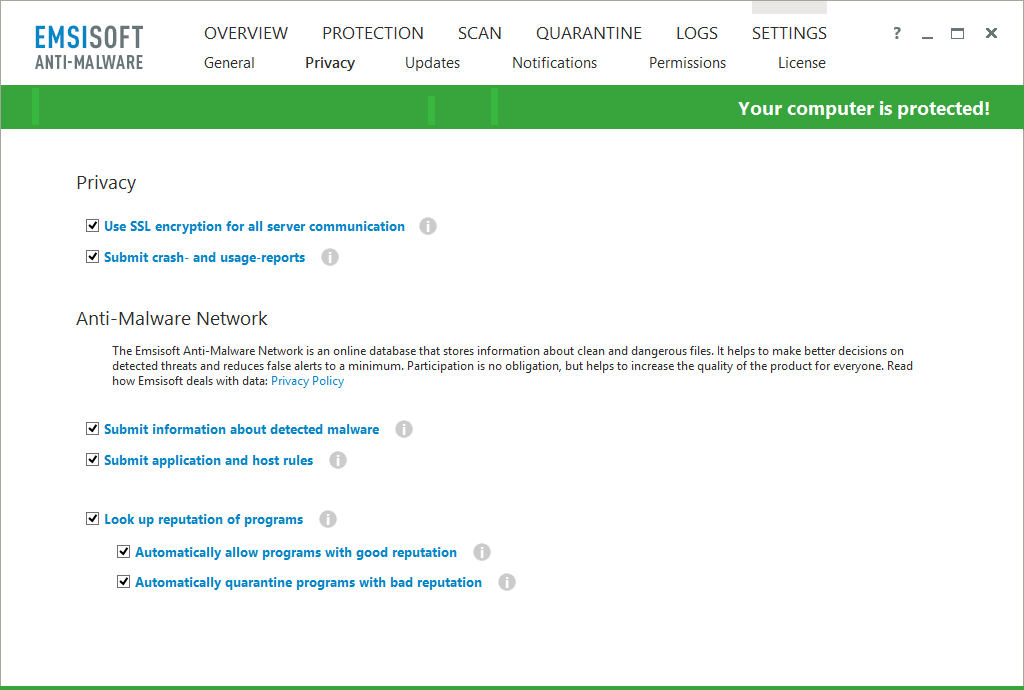 Did your antivirus let you down? We won’t. Download your free trial of Emsisoft Anti-Malware and see for yourself. Start free trial
You like the frog? Download your wallpaper in HD.