It’s a beautiful, warm summer day at Mount Maunganui as perfect glassy waves roll towards the shore in long, straight sets. Light winds compliment the excellent surf conditions. New Zealanders have never needed much of an excuse to grab a surfboard and hit the water and today the takeoff zone is packed. Teens are out on shortboards, children play in the sand. However, a lifeguard seen paddling his way towards a seemingly lifeless object drifting just beyond the break signals that this is not an ordinary day for the team of Surf Life Saving New Zealand.

Two more lifeguards stand side by side on the beach on high alert, shoulders tense. Suddenly one turns to the other and gives the order and I look on as they leap into a rescue boat and race to meet the drifting object. Further rescue vehicles are on standby on the shore as a drone takes flight from the water’s edge. There is such a sense of urgency that we all stand on tiptoes just to catch a glimpse of the chase.

Luckily we are not witnessing the rescue of a drowning person, though these occurrences have been far too common in recent years in New Zealand. Rather, today is the eagerly awaited trial for Emsisoft and Surf Life Saving New Zealand (SLSNZ) as part of our joint web protection project. Together we are launching GPS drifters into the sea to monitor local currents and rips, and the data gathered will support SLSNZ in their efforts to keep swimmers safe on local beaches and beyond.

Emsisoft’s involvement with SLSNZ began with the repeatedly shocking drowning statistics we were seeing online. In 2015, 113 lives were lost to drowning, 25 percent up on the previous year’s total of 90. Tragically, 86 of these 113 drownings were preventable. There were 81 preventable drowning deaths in 2016 (WaterSafety.org).

The incredible work of Surf Life Saving New Zealand goes hand in hand with Emsisoft’s own endeavors: monitoring behavior and looking out for potential dangers to protect people from common threats they encounter while surfing. The partnership felt like a natural fit, and we were happy to help.

Drifters plot what is happening underground; drones, from above

Drifters plot GPS data to map the rip currents and their behaviors to measure the physical layout of the (topographic) headland rip current across a range of different swell, tidal and wind conditions. 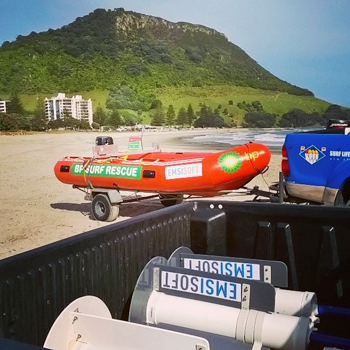 How it works: A GPS unit is attached securely to the top of the drifter which records rip direction and rip current velocity. The drifter itself is a weighted ballast container that is specifically designed to sit at the top of the water column (just below the surface) and travels in a rip due to the three fins which pick up the current.

The co-coordinator of the trial, Dan Lee, launches the experiment from the shoreline, assisted by volunteer lifeguards from Omanu, Mount Maunganui and Papamoa Surf Life Saving Clubs. Once the drifter has entered the surf, he conducts the trial from the cliff on Leisure Island with a VHF radio in hand. A lifeguard remains on shore to help with the launch and retrieval of the drifters. The two in the Inflatable Rescue Boat (IRB), helmed by Allan Mundy, are tailed by the lifeguard on the paddle board. 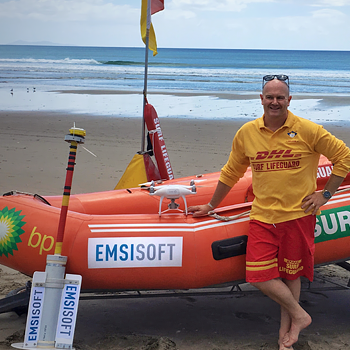 Surf Life Saving New Zealand national lifesaving manager Allan Mundy says the custom made drifters performed as they were expected to, acting as a swimmer caught in a rip.

“The trial proved just how powerful rips are. What was interesting was the fact that even with minimal surf, the drifters traveled very fast. One of the drifters broke away from where it was predicted it would go and went half a kilometer down the beach in the opposite direction. This illustrates the transient power of rip currents and the danger the Mount Maunganui rips pose to the public,” he says.

“There’s still a lot to learn but the early success of the project at Mount Maunganui can be used as a template for further trials at more locations across the country this summer,” he says.

Surf Life Saving New Zealand explain that “the information gathered through the project will be added to a database which will assist in future current predictions during lost persons searches and the method will be used to set a data standard for future research on additional sites around the country.”

The drones provided by Emsisoft are adding further weight to the research. Footage taken at the trial clearly depicts the long sweeping range of the surface currents from above and tracks the drifters visually across the headland. Recorded observations such as those captured by the drones will continue to aid in the mapping of these changeable waters and the swimmers caught in them.

Surf safety is vital both online and in the water

The dangers of the sea are often hidden from view so your average surfer may not be aware of the dangers lurking beneath the surface. The study of behaviors to avoid emergency situations is as vital to online protection as it is to surf protection in the water. So rather than just helping those that are already in danger, an important part of this project is to raise awareness of the dangers and the importance of putting place early intervention practices. Whether on a surfboard or on the internet: make sure you are aware of the dangers first, and seek help from experts to help you surf safely.