Remote Desktop Protocol (RDP) is currently, by a wide margin, the most common attack vector used by threat actors to gain access to Windows computers and install ransomware and other malware.

RDP was designed to enable remote access for technicians to resolve software issues. However, if not properly secured through VPNs or other means, RDP functions as an open invitation to attackers – especially on business servers that are online 24/7.

Emsisoft protection software now monitors the status of the RDP service in real-time. If it detects multiple failed login attempts, it will trigger an alert on the Cloud Console for administrators. They can then decide whether to disable the RDP service on the affected device.

In addition, the single-device dashboard also shows the status of the RDP service on each device. 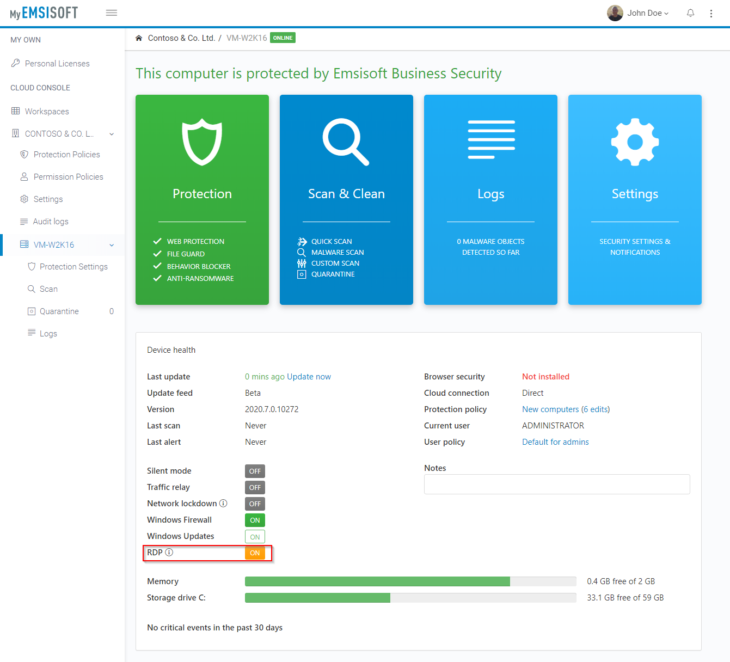 Note: The RDP feature works with Windows 10 and Windows Server 2012 and up.

One of the features frequently requested by our customers was the ability to select custom columns with device properties on the Cloud Console workspace dashboard. You can now choose from more than 25 available metadata columns. This allows you to optimize your daily workflow without missing any important security-relevant information.

All 2020.7 improvements in a nutshell