A few weeks ago our colleagues over at BleepingComputer approached us asking for help with a recent malware outbreak that specifically targets Windows servers. Several companies as well as individuals found their servers being locked by a malware that claims to originate from the “Anti Cyber Crime Department of Federal Internet Security Agency” or short “ACCDFISA”. Of course such an institution does not exist and even if it did, it surely wouldn’t ask the owner of the server to submit a certain dollar amount using PaySafeCard or MoneyPak codes. The affected servers fell prey to a new malware family that is currently on the loose.

The ACCDFISA malware family belongs to a malware category called “ransomware”. Ransomware is a special kind of malware that takes a system and its data hostage in an attempt to extort money from its owner in exchange for returning control back to him. What makes the ACCDFISA family special is the unorthodox way in which systems get infected as well as how various third party tools are used to accomplish the malware family’s goals.

How are systems infected?

Unlike most malware nowadays, ACCDFISA does not use drive-by or social engineering attacks to infect a system. It is instead installed manually by the attacker himself. The attacker targets Windows systems running the Remote Desktop or Terminal Services, which is usually the case for remotely maintained Windows servers. Based on traces found on some of the infected machines, the attacker is using a tool called “DUBrute” to find systems running either of the aforementioned services. The tool will then go ahead and launch a dictionary based brute force attack on those systems. Based on log files of infected systems it seems the following user accounts are attacked:

If the brute force attack is successful and a set of valid user credentials is found, the attacker will remote log in into the system where he will then download and execute the malware. Due to the fact that the attacker uses a regular remote desktop connection, installed anti-virus or anti-malware software may prove to be ineffective as the attacker can just disable the software or allow the malware to run in case a warning message pops up.

Commonalities across all ACCDFISA variants

We received the very first ACCDFISA sample on February 23. Since then there have been at least 3 new major variants of the malware.  Those variants differ slightly in the ways passwords are generated and certain behaviors are implemented. File, service and application names used by the different variants changed as well. 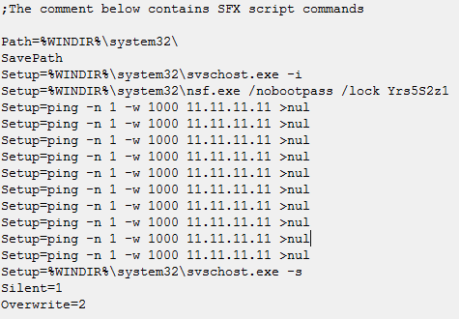 All variants are written in Pure Basic and are installed using a 2-stage installer. Stage 1 consists of a WinRAR SFX archive with a little WinRAR setup script that will unpack the malware files to predetermined locations inside the 32bit Windows system directory (C:WindowsSystem32 or C:WindowsSysWOW64). The second stage is triggered by the WinRAR setup script and executes the various malware components with special command line parameters which will cause the malware components to copy themselves to their intended locations and install themselves properly.

The ACCDFISA malware itself can usually be split into three major parts:

All ACCDFISA variants use various third party tools like WinRAR, sdelete, NoSafeMode or netsh to implement some of the their functionality. 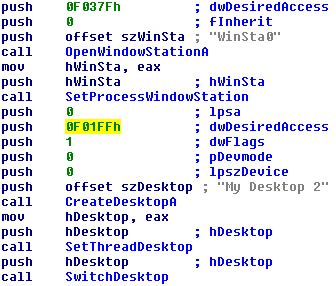 The screen locker used by the ACCDFISA family is rather simple.  It uses the following registry auto start entry to ensure its execution on each reboot:

Once executed it essentially creates and switches over to a new desktop, where it displays its ransom notice. This will effectively prevent the user from using the system, unless he puts in the correct unlock code, which will cause the screen locker to switch back to the real desktop and terminate. 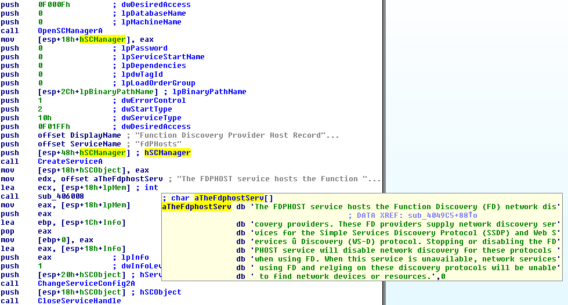 The crypto malware is implemented as a Windows service. The names and descriptions used to register the service vary from variant to variant. The malicious service will search all connected drives for files that it will either delete or move to encrypted RAR archives using the command line version of WinRAR.

To determine which files to delete the malware uses the following rules:

To determine which files to move into encrypted RAR archives the following rules are used:

The malware maintains a list of all files it moved to encrypted RAR archives. The exact name of the list varies from variant to variant.

After the first encryption run is finished the malware will cause the system to reboot. 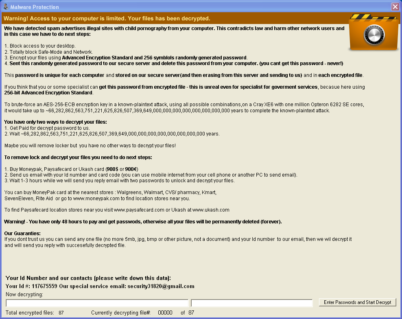 An example for an ACCDFISA decryption tool. This was taken from the third ACCDFISA variant which uses two different passwords. 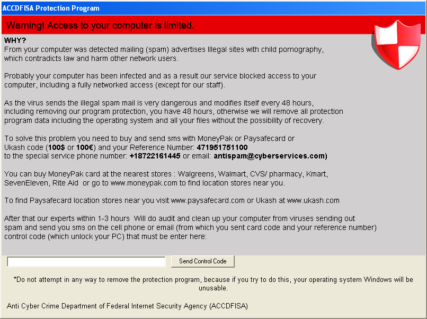 The first variant was first seen on February 23. The name used by this variant is “ACCDFISA Protection Program”. The following files and services found on a system are an indication that your system is infected with this variant:

The routine used by the first ACCDFISA variant to delete the SafeBoot registry key. It uses the Windows “reg” utility to do its dirty work.

This variant deletes the SafeBoot  registry key located in HKEY_LOCAL_MACHINESYSTEMCurrentControlSetControl to prevent the user from booting the system into safemode. 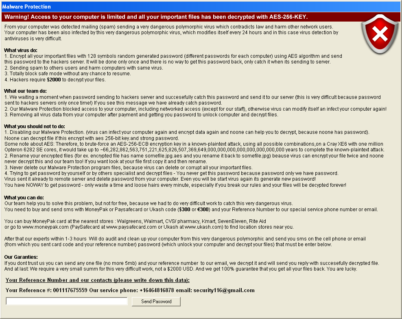 This variant was first seen on March 12. The name it uses is “Malware Protection”. Unlike variant 1 that deleted the SafeBoot registry key this and all other future variants use the tool “NoSafeMode” to prevent the user from booting into safe mode. Safe mode can be unlocked using NoSafeMode and the code “Yrs5S2z1”. The following files and services found on a system are an indication that a system is infected with this variant:

Like in the first variant, encrypted files will have the “.aes” extension. 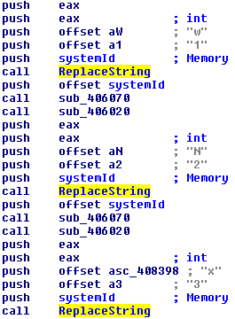 Part of the substitution cipher routine used in the second ACCDFISA variant to convert the numeric system id to a password string.

Unlike the first variant though, the password for the encrypted files and the screen locker are no longer static. They are now generated based on the boot drive’s volume id. A small tool to generate both the decryption password as well as the unlock code is available for download. 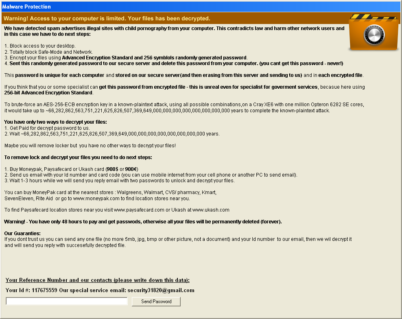 The third variant uses the same name as the second variant. It was first seen on March 25. The following files and services found on a system are an indication that the system is infected with this variant: 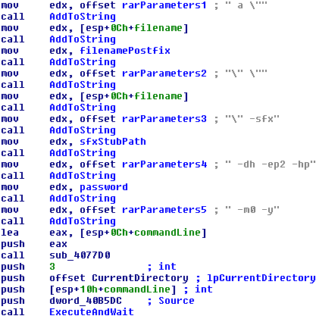 This code fragment shows how the third ACCDFISA variant assembles and executes the exact command line used to add files into the self-extracting and encrypted RAR archives.

Beside the transition from RAR archives to RAR SFX archives, the password generation has changed significantly as well. Up to this point passwords were either static or could be generated based on certain system parameters. Starting with this variant, ACCDFISA uses randomly generated passwords instead. On its first execution the crypto malware will randomly generate a numeric string. The generated string is consequently stored inside “rvid1000.txt” as well as “msdadiags.dll” for future executions to ensure that consecutive runs use the same string. It is used in combination with a substitution cipher and a static password prefix to generate the actual encryption password.  So unless the numeric string is available, it is almost impossible to reconstruct the password. 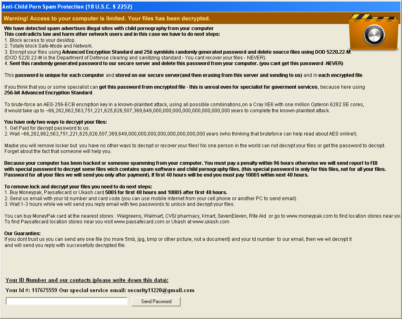 The biggest change in this variant is the usage of Sysinternals’ “sdelete” tool instead of the “DeleteFile” Windows API to delete files. With older variants it was possible to recover some of the deleted unencrypted files or the files storing the numeric ids using undelete tools like Recuva. This is now no longer feasible. 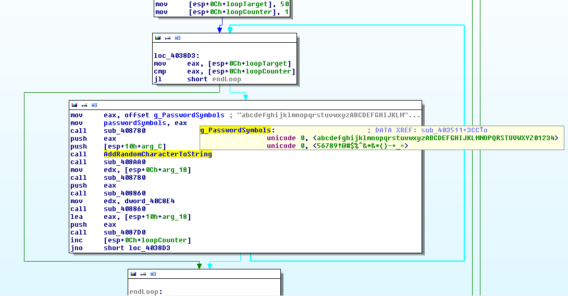 This routine is used to generate the first password used by the fourth ACCDFISA variant.

Password generation changed again as well. Similar to variant 3 two different passwords are used to encrypt the files on the system. To generate the first password the crypto malware will generate a 50 character long random string. The string is then saved to fvd31234.txt as well as udsjaqsksw.dlls. The random string is than prefixed with a static string to create the first password. As usual the fvd31234.txt file is copied by the attacker to his system and then securely deleted using the fvd31234.bat script. On the next boot the service will securely delete “udsjaqsksw.dlls” as well if still present and fall back to a second password generation algorithm. The second algorithm will calculate the second password based on the boot drive’s volume id, similar to variant 2. While it is possible to generate the second password with ease, it is almost impossible to recover the first password due to the random nature and secure deletion.

Last but not least, the malware changes the ClearPageFileAtShutdown registry value to cause Windows to clear the page file on shutdown eliminating all traces that might be left due to disk swapping.

How can systems be protected from this kind of malware?

The most important line of defense is a proper password policy that is enforced for all user accounts with remote access to the system.  This does apply to rarely used accounts created for testing purposes or by applications as well.

Even better would be to disable Remote Desktop or Terminal Services completely if not required or at least to use IP address based restrictions to allow the access to these services from trusted networks only.

Although there is no hard evidence that suggests the recently found Remote Desktop Protocol vulnerability was ever used to compromise a system, we suggest to make sure you have patch KB2621440 installed as well.