Systems in the Netherlands are currently being hit hard by a new wave of crypto malware named “Trojan-Ransom.Win32.Dorifel”. Based on press reports as well as our own telemetry gathered through our Emsisoft Anti-Malware Network thousands of Dutch systems are already infected. The majority of them located in government, public sector or company networks.

Based on preliminary research “Dorifel” usually enters new networks and systems through the use of a different malware: “Citadel”. “Citadel” belongs to the family of financial malware and is closely related to the “Zeus” bot family. It comes to no surprise that this isn’t the first time that the “Citadel” bot net is used to infect systems with different malware. Just a few weeks ago at the beginning of July “Citadel” was used to infect tens of thousands of PCs with the “Reveton” ransomware.

Once “Dorifel” enters a new system it will copy itself into the user’s application data directory using a randomly generated sub-directory and file name. It then creates a short cut in the same directory it copied itself into that points to the malware file and starts it with the “-launcher” parameter. This shortcut is then added to the “Load” value in “HKCUSoftwareMicrosoftWindows NTCurrentVersionWindows” which causes the short cut to be executed on every Windows boot automatically.

The code used by “Dorifel” to start up the three background threads doing the actual work.

As soon as “Dorifel” is executed that way it will start three new background threads:

On the first look the second file seems legit as it has the expected .doc extension. A closer look though reveals that this file is of type “screen saver” and is therefore executable. The reason for this display is the unicode RTLO character that switches the display from left to right to right to left.

Once every 5 seconds the drive crawler thread becomes active. Its purpose is to look for Excel and Word documents on all drives and mapped network shares connected to the system that do not contain a “System Volume Information” directory. Once such a document is found “Dorifel” will infect it following these steps:

Once a document is infected that way it will show up almost as usual within the Windows Explorer and all standard Windows dialogs, but as soon as a user double clicks such an infected file it will not immediately open the document, but will run the malware instead. The malware then infects the system if not already infected and extracts and decrypts the content of the appended document to a temporary location. The document is then opened using the application registered for this document type. So for the average user everything looks normal while in reality he may have just infected his system with the “Dorifel” malware. 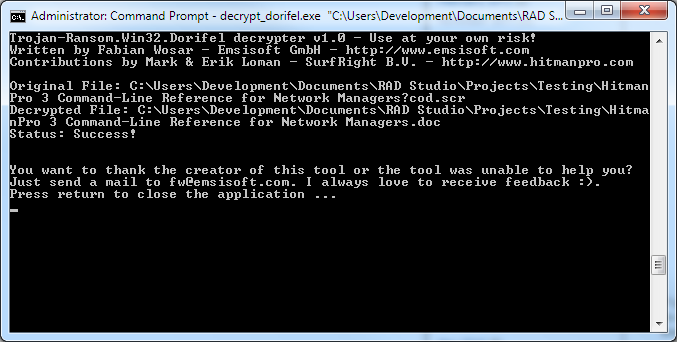 The Emsisoft “Dorifel” decrypter doing his work and decrypting documents encrypted by the “Dorifel” malware.

Due to the fact that “Dorifel” infects Word and Excel documents on the system as well as the network removal can be tricky. In order to remove “Dorifel” without loosing any documents we suggest the following:

If you have problems with these steps or find your system being reinfected over and over again you may want to contact our free malware removal support. The removal service is absolutely free even if you are not an Emsisoft customer yet.